More than a decade ago, when the first Cisco Mobile Visual Networking Index (MVNI) report was released, mobile traffic accounted for less than 5% of total IP traffic on the global network. Currently, the role and reliance on cellular networks has increased dramatically.

Globally, there has been an increase in mobile web access for consumers and business users. The increased coverage and quality of mobile broadband has also contributed to the growth in demand for cellular connectivity, media, and the wide range of mobile IoT applications and associated application ecosystem. 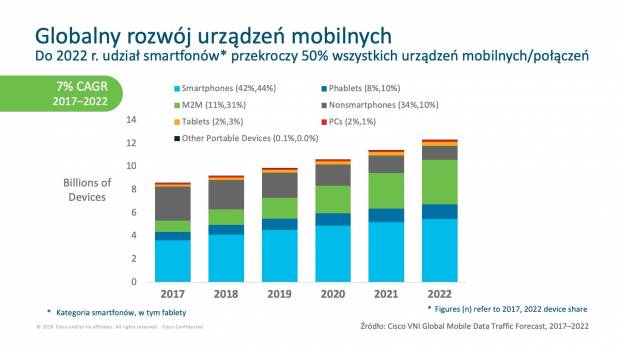 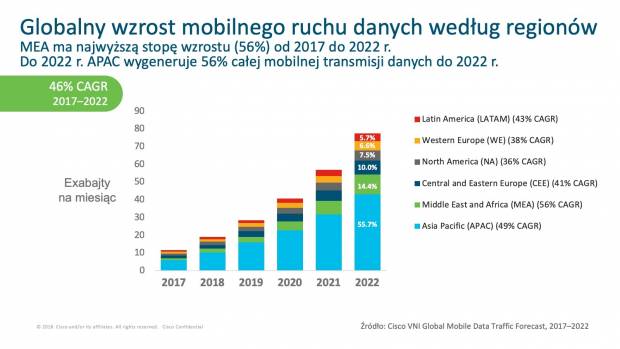 According to this year’s edition of the survey, covering the years 2017-2022, mobile network traffic will approach the level of 1 zettabyte per year by the end of the forecast period. By 2022, mobile traffic will represent almost 20% of global IP traffic and will reach 930 exabytes per year. That’s nearly 113 times more than all the global cellular traffic generated just ten years earlier in 2012.

Mobile technologies connect people and things more than ever. There were 5 billion mobile phone users worldwide in 2017, but this number is expected to rise to 5.5 billion over the next five years, which represents approximately 71% of the world’s population. By 2022, there will be a total of over 12 billion mobile devices and IoT connections (compared to approximately nine billion mobile devices and IoT connections in 2017) – by 2022, mobile networks will take over charges more than eight billion personal devices, mobile phones and four billion IoT Connections.

Cisco’s forecast update also predicts continued efforts by mobile operators around the world to improve network performance. The global average mobile network capacity will more than triple, from 8.7 Mb/s in 2017 to 28.5 Mb/s by 2022. Average data rates on mobile networks vary widely depending on the geographic location, as certain regions begin to gain popularity.

– Cisco helps network operators meet the growing bandwidth needs of mobile connections of consumers, business users and those who use IoT applications – said Przemysław Kania, CEO of Cisco Poland. “As global cellular traffic approaches the zettabyte limit, we believe that 5G and WiFi will co-exist as essential and complementary access technologies, delivering key benefits to our enterprise customers and service providers, enabling them to extend their existing network architectures.